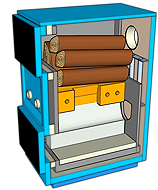 Biomass is the perfect renewable, solar powered fuel.  Wood gasification offers a local, low embodied energy and low emission, renewable heating fuel when compared to conventional fossil fuels like oil and gas. Like any renewable technology though, it isn’t for every application or user. In fact it isn’t even permitted in some areas!

Gasification is a process where the wood gas is extracted from the fuel and used to produce heat rather than loosing it through the chimney. The result is as little as half the wood for the same amount of heat. Boiler simply means that the heat is transferred to a liquid medium rather than air. More from Econoburn on how it works.

Discussions regarding the “cons” of biomass as a renewable fuel often (understandably) revolve around lack of control, carbon emissions, particulate and deforestation;

Lack of Control – “With wood heat, either it’s too hot or too cold” and “I’m not around enough to keep it going”.  High efficiency wood boilers have made this a thing of the past for 2 reasons; they have storage and water is the distribution medium. By storing the heat from the wood in a thermal reservoir, heat to the building can be controlled during the burn and used for days after the fire burns out.  By using water as the distribution medium, heat can be delivered via radiant in slab, hydronic baseboards or fancoils to a zone where the heat is requested.

Carbon Emissions – Though its true that biomass is carbon neutral from the perspective that a tree sequesters carbon during its lifecycle and releases it during combustion or decomposition – its not exactly the same thing. When biomass decomposes, much of the carbon is locked in the ground, when it is burned, a higher percentage ends up in the air, where we don’t want it. Though the net impact is a fraction of what fossil fuels is, its still worth considering. That being said, if you are going to burn wood, there is no cleaner way to do it than with a gasification boiler – a) because you will burn 1/2 as much wood, you will produce half as much carbon b) the process efficiency releases a fraction of the carbon that conventional wood burners do for each log burned.

Particulate – Due to the high combustion chamber temperatures and gasification process, the particulate emissions are negligible when compared to a conventional wood fireplace.

Deforestation – In British Columbia we have an abundance of wood waste due to the logging industry from cutblock to sawmill as well as natural sources such as blowdown, driftwood and pine beetle kill. Responsible harvesting and selective woodlot management are also a critical part of minimizing impact. 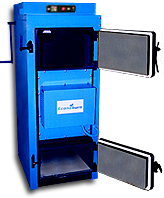 Cost – Depending on what you pay for wood and what fuel you are displacing, you heating bills could be between 1/3 and 1/8 of what you currently pay.

Insurance – Many insurance companies require an alternate heat source to wood. With the distribution and storage in place for a wood boiler, it’s simple to incorporate an electric immersion heater to satisfy this requirement.

More on the environmental impact from Econoburn